What do you do when a thing that you have been thinking of for more than 5 years and work so intensively and passionately on, is realized? Well, I get a little empty and a little emotional. So I hope you don't mind if this story turns out slightly emotional.

Drive. That's what we do at the moment. I am returning from a big event in a big city. But today I am not the driver. This time I sit in the passenger seat and these thoughts rain down on me as the raindrops tap on the windshield. And my thoughts drive me to certain people. Certain men, that made it all possible.

A brilliant young researcher. An assistant for programming at the university with aspirations for an academic career. It is 2012. There is a crisis in EU, there's a crisis in this little EU country. The times are tough, the job market is turbulent. It is exactly the time when I decide to build the product that I was dreaming of for so long. But I need a really good programmer to make it true.

The brilliant young researcher applies for a job interview. A pure coincidence. I talk passionately about my vivid and very articulate dream. He decides to join in. The dream becomes our dream and we become a team. And here we are, a year and a half later. The first part of our mission accomplished. The product is out. 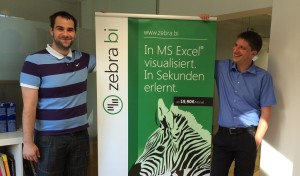 I still open Edward Tufte's wonderful books from time to time. And when I do, I automatically turn the page to William Playfair's beautiful charts of England's imports and exports. I can see the man bending down over the sheet of paper, drawing. It's the year of 1786. The man is an engineer. He is looking at numbers, as always before him neatly aligned in a vertical table. But this man... he decides to turn the numbers into a picture. He takes color pencils in his hands, prepares the grid and carefully starts drawing the lines. He writes the labels thoughtfully, so that people will understand. He colors the positive balance in green, he colors the negative balance in red. Well of course, what else, it's only natural! It is very simple. 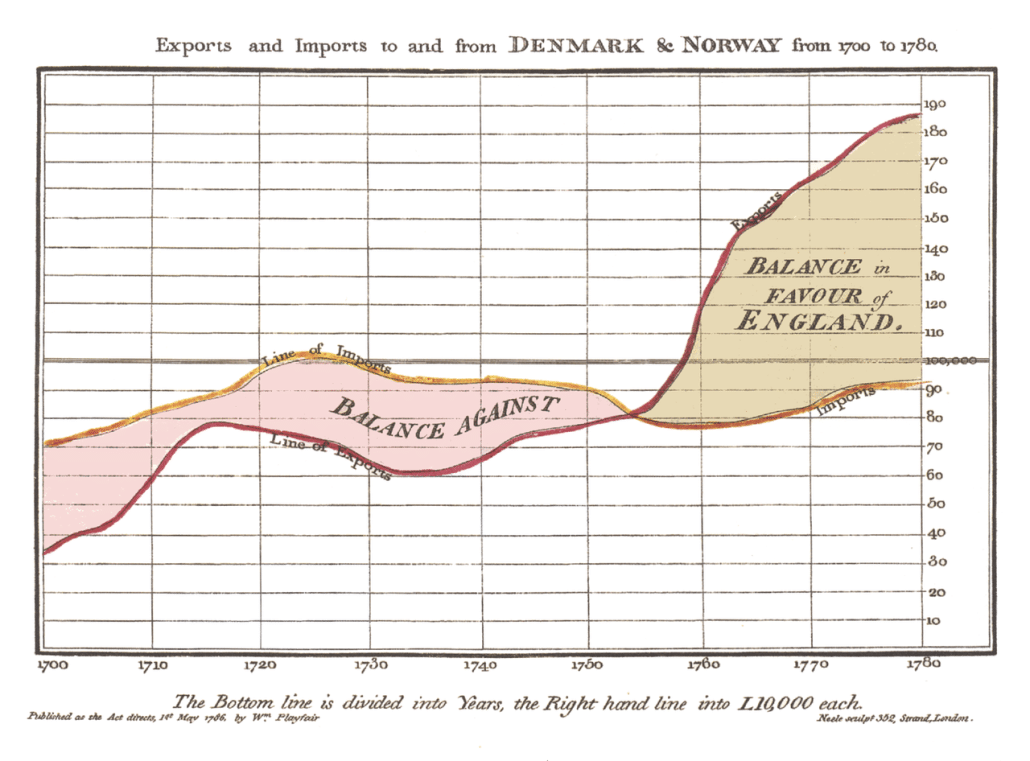 It is december 2012. Only a skilled enthusiast is able to build this chart in Excel. And even for him it takes a lot of time. Why is this so complicated? More than 200 years have passed, the man has landed on the moon and Google's unattended cars are driving in our streets. It should be very simple!

So I build it myself as so many Excel charts before. I am playing around with these Excel tricks as so many times before. Again a coincidence. It's exactly the time when we start developing this product. An Excel add-in. And the first thing it can do is to produce this man's pictures. Only this time from numbers in an Excel table. And this time it's very simple - it only takes 1 click.

Dear Mr. Playfair, today I have some time off. So I build a little tribute to you. I add a style named "Playfair" to our product and click on the very first icon we added to this tool: 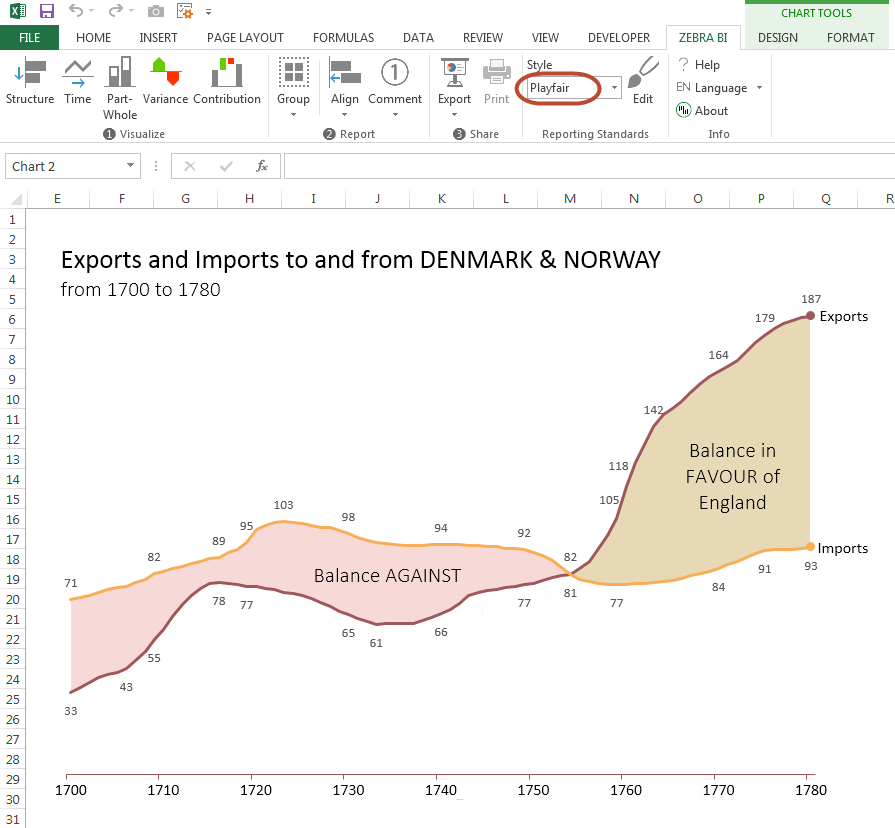 Graphics is a tool that obeys universal laws that are unavoidable and undisputable.

It was the year of 2005. I can't remember how I found these french web pages. They were featuring a curious man with a pipe. A cartographer named Jacques Bertin, who wrote this book called Sémiologie graphique. A work, written back in 1967, that sounded most intriguing to me. The retinal variables, the planar dimensions, the construction and function of graphic representations, rules of legibility, definitions of efficiency, the title concept, plus-minus charts, the whole syntax of graphics! And the most interesting method called reorderable matrix that later influenced the way we designed our "Small Multiples" functions. It is all there in this absolutely fascinating book, defined so clearly and undisputably that it simply became a bible for me. Most importantly, it was through Bertin that I first realized that visualization is not just about legibility and clarity. It is a sign system, a language. A language of graphics with its quite clearly defined syntax and quite universal rules.

I googled for nights to get more information and tried everything to get the hardcopy of this book. I learned that an English edition was published in US, but the book is sold out. I found some old and used copies, selling for $500. Hm, a bit too much for a worn out book. Then I hear that a new edition is about to be published. I write to the publisher, no answer. Only a few years later I read the news that the book has been published. It is 2010 and I probably become the first buyer of this edition on the Amazon. It has never left my desk ever since.

If we are able to clearly visualize a symphony with the help of sheet music, then this should also be possible for monthly sales.

It is 2007. Another coincidence. I get the job of preparing a course on reporting for a slovenian franchise of Controller Academie. I see that the material needs a thorough rework. I start to write, when somebody mentions that the former founder and manager of the software company I work for is now specializing on business reporting. His name is Rolf Hichert and he is German. I find his website. It's all in German so I only understand half of the text. However, I immediately understand the pictures. They look a little "German" too ;), but I recognize their value in a split of the moment. They are so meaningful! This man has distilled all visualization theories into a solid and well-structured system, but more importantly, built a whole semantic layer for business communication on top of it. I apply for the next available seminar he is leading in Switzerland, take a vacation from my job and pay my full monthly salary to attend the training.

It changes my life. I quit my job and start my own consulting company where I research and put these ideas to practice and get drawn deeper and deeper into visual languages and business reporting. It all ends in our product, which is hopefully just a start of a new chapter.

Dear Rolf. I could not have the chance to meet your abovementioned ancestors. But I am so glad that I met you and that we became friends. We discuss a lot. We dispute, we argument. It's quite intense sometimes. And yet these discussions are the single most important moments in my professional life. You have influenced and challenged my ideas so much, that it would make no sense to try to describe all your contributions. Instead I do this, if it is not too pretentious:

I dedicate our little zebra to you.

Zebra BI has been launched!

Zebra BI at the 14. Adriatics ICV Controlling conference
Scroll to top
Share This