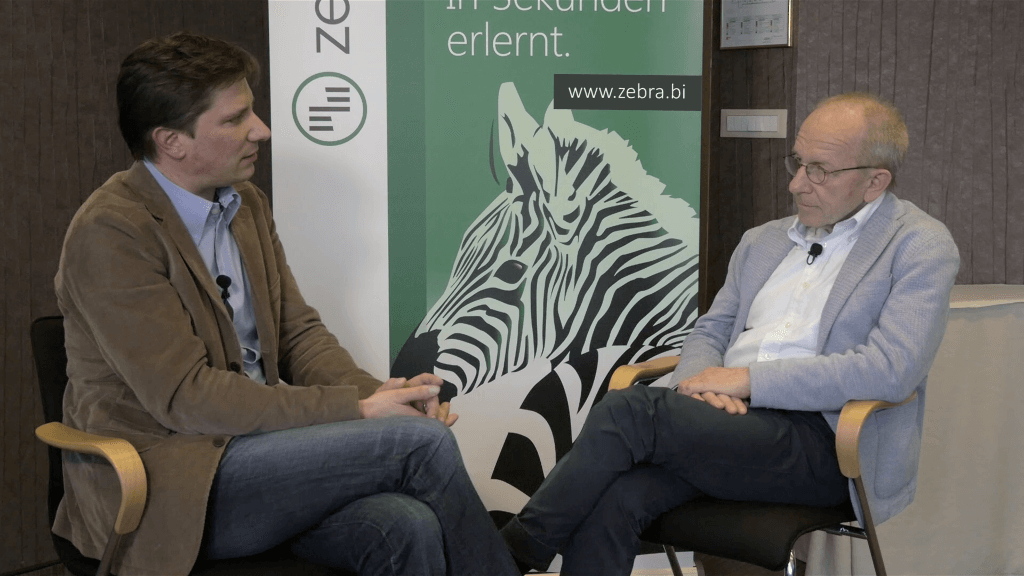 This is the second video of a three-part interview series with Dr Rolf Hichert. This time you'll hear practical tips to successfully implement IBCS in your company, as well as why Mozart didn't add a little 3D effect to notes in his sheet music.

If you missed part 1, you can watch it here.

Dr Rolf Hichert is the president of International Business Communication Standards (IBCS) Association. On his recent visit to Ljubljana, our CEO Andrej Lapajne did an interview with him.

In this video, you'll learn why you should not use color in your business reports, the importance of information density, the three steps to implementing IBCS in your company and which companies already implemented IBCS in their internal reporting.

Enjoy and make sure you follow up with part 3 of this interview!

Practical tips to implement the IBCS standards in your company

Andrej: Do you get any opposition from companies? Do they find a certain part of the concept problematic to implement? For example, they want to push their corporate colors. I get that a lot. Is there some space for emotional design in the IBCS? How strict is it, e.g. can I modify the black color?

Rolf: It's your decision. If you want to use dark blue instead of black, you can. But would Tchaikovsky say "Mozart and Bach had those black and white music sheets, I want to add a bit of pink, blue and green? " No, they all use the same black and white music sheet conventions. Even today when we have color printers, we use color only for highlighting. The musician might underline in red color or highlight with a yellow marker, but the picture is the same. Even the engineer drawing a gearbox... this would be black and white. The electric plan would be black and white, it’s a good contrast. The books you read are black and white, not colorful. Colors are used only in children's books. Coming back to your question: yes, there is big opposition, especially from corporate design. If your corporate identity is blue, you can use blue bars and columns. But if your corporate identity is red, I would not suggest using red as a color for actual. In this case, we have no "variance color" anymore. So I would suggest sticking to those basic notation concepts. But there's always a compromise.

In children's music sheets, you have birds and flowers. Pro musicians need concentrated information.
Click To Tweet
I think the few cases when I had the chance to talk to the CEO or CFO of a large organization, accepted this concept. They think it's not necessary that corporate design influences our bar charts. If you talk to the second or third level people, they don't have the decision power to really change the business. There are quite a few large organizations that use these concepts 100%.

Andrej: I also find that it's always a big issue at the beginning. But after you actually present their data in IBCS forms and shapes they start to deal with the content and somehow this issue fades away.

Rolf: If you want to teach the children music, then you have little birds and little flowers in the notes. But if you have a big orchestra in front of you, they’re professional people... A professional engineer, professional manager, they want to have concentrated information. Our concept is: simplify. We have to take away everything that has no meaning. If a color, a shade or a frame has no meaning, we take it away. We need the space for content.

Andrej: Add information instead of decoration...

Rolf: Mozart didn’t start frames and shades and thought: “Oh, this little note looks nice with a little 3D effect”. The music is what we like about Beethoven,
but not the way the notation looks like. This is not so important.

People think it's important that their reports look nice. No, they should not look nice - they should be easily understood. Everything that disturbs or doesn't help to understand the content, we take it away.

Take away everything that disturbs or doesn't help to understand the content.
Click To Tweet
Andrej: Information density is also very important. Sheet music for children consists of a few notes here and there, very decorated, but sheet music for professionals has a lot of notes. The professional business report also has a high information density.
Rolf: My suggestion is instead of presenting monthly data in a PowerPoint presentation on 60 or 70 slides with little information, to have 7 or 8 slides with the same content. That means compression of 10 to 1. The content of ten slides is on one slide. This allows us to understand the complexity of the situation.
If you have a map that consists of rivers on one page, the cities on the next page, the railroads on the next page, it's difficult to understand. But that's what we do today. In the PowerPoint presentation, we have sales on one page, the margin on the next page, and profit on the next page. If you put sales, margin, profit, head-count all on one page, it gives the complete picture. Of course, it takes more time to evaluate and understand this one slide. If you had one minute for one slide before, you now have 10 minutes for one slide.

Andrej: You can compare things and learn from the comparisons. The comparisons actually enable us to learn. If you only have one number and don't have the context (like the plan, previous year, competitors, broken down by countries,), you don't understand whether this is good or bad. You need this context.

Rolf: Edward Tufte said some 20 years ago in one of his first books that we need at least two or three or even four dimensions on a slide. A pie chart with one dimension or a series of ten columns is one dimension only. With it, you can explain only mundane things. You can only say for example "Our export to Italy is 25%." That's very mundane. But if you display export to Italy over time, compared with export to France and other countries, the budget and to competitors, then it's an interesting story. The more dimensions we have on a slide, the more interesting stuff you can tell. "Add details", that's what Tufte says. He says that information density is data per pixel.

Andrej: Rolf, you helped so many companies solve their reporting problems. Is there a road map to efficient business communication in a company? How should a company start implementing IBCS?
Rolf: There are at least 3 important preconditions we have to fulfill. First, we need a concept. If you adopt the IBCS concept, this problem is solved most of the time.
Second, we need software. Without software, it doesn't work. You cannot write a booklet, send it to 5000 people in your organization and say "Follow those rules". It doesn't work. We need software.

This was rather difficult 5-6 years ago, there was Excel and nothing else. No other tools existed. Now Zebra BI is offering a solution, as well as some other software companies. The user should not care about those rules. The user just inputs actual data and the software makes them grey. The user inputs budget data and the software visualizes it appropriately. The software knows what is the previous year, sales or head-count. There is a meta layer in the software where certain rules are defined that incorporate IBCS into the software.

The third one is the ability of a large organization to roll our changes - change management. This is at the moment the toughest obstacle. People do not want to change their concept. They're proud of what they've done and suddenly they have to follow certain rules. And this leads - to be honest and clear - to a transparency which not everybody likes. We would all like to have transparency but maybe not in our own environment. So again: it is the concept, software and ability of organisations to roll-out.

The change must come from the very top of the organization - CEO, CFO, central headquarters working on this. From there going to lower levels. Some organizations have the power to do this, others don't. I know organizations that have rolled out these concepts on a worldwide scale. It took them 3-4 years. It's not a weekend job, it takes time. On the other hand, some companies are not able to do it in one location. One department does things one way while another department does them differently.

Andrej: Do you have a secret weapon, a recommendation on how to change people's minds?
Rolf: There's one thing I suggest: do not say that they should change the concept. It's very simple: you look at what they are doing today, then show them your version of the visualization and let them decide. If you do a good job, if you suggested a consistent concept and a good-looking alternative, they will decide on your solution. If you are able to let them think it was their idea you don't have to sell it. They are convinced and they see the advantage. If you start by criticizing and saying "we have to change this and that", it won't work.
If your concept is good, why should they continue to use the old 3D colorful visualization? But you have to have people at the top convinced. People two or three levels lower might have some political interests. They fear the work that will be needed if you make all these changes.
In my experience every time I had the chance to talk to the C-level people, I could convince them in one hour. But they have more important things to do than talk about reporting standards. Maybe in ten years, it will be different, but at the time being it's difficult to reach those decision makers.

We would all like to have transparency but maybe not in our own environment.
Click To Tweet
Andrej: There are quite a few companies that already embrace the value of standardization. Could you name a few companies?
Rolf: At the time being they are mostly companies from Germany, Switzerland, and Austria. That's where we started. Now also Philips started a worldwide project. They presented their concept at our convention last year. We will have our annual conference on their premises in June. I've heard that Coca-Cola bottlers are starting to use IBCS. I know there are big projects at Bayer, Lufthansa and other large organizations.
In the last ten years, I had more than 6500 participants in our seminars. There are quite a few companies that follow this. Maybe not to 100%, but they got the idea that standardization by itself is an advantage.
There's one telecommunication company that wanted to have magenta color as their actual data. In the end, we convinced them to not use magenta for actuals because it would spoil the whole picture.
So, there are 100-200 large organizations that are following this concept already.

Learn why it's important to introduce standardization in reporting, some examples, and what are the most important concepts in IBCS.
Read more

Get to know the basics of IBCS, learn how to redesign a sales dashboard, and find out how to implement IBCS in your organization.
Read more

Explore the importance of software in the implementation of IBCS reporting standards in a company and what the future holds.
Read more

Live interview with Andrej Lapajne: What’s the Future of Reporting and the Job of a Controller?

How does the future of reporting look like? How will controllers need to adapt to it? Hear it for yourself from Zebra BI CEO and Founder, Andrej Lapajne.
Read more