This time we'll take a deep dive into the 2014 annual report of Bill & Melinda Gates Foundation to find out if data visualization can help explain their consolidated financial statements. As Stephanie Evergreen pointed out in her intriguing article, there's a lot of room for improvement in annual reports of non-profits and foundations (to put it mildly). Data visualization in annual reports is far from being efficient and clear. Many times it's just non-existent.

Stephanie's got an excellent point. However, when observing her proposed visuals and especially when faced with the extreme ranges of values in the financial statement of Bill & Melinda Gates Foundation, I thought it's time to add some more 'meat' to this topic.

Here's the original report by KPMG: 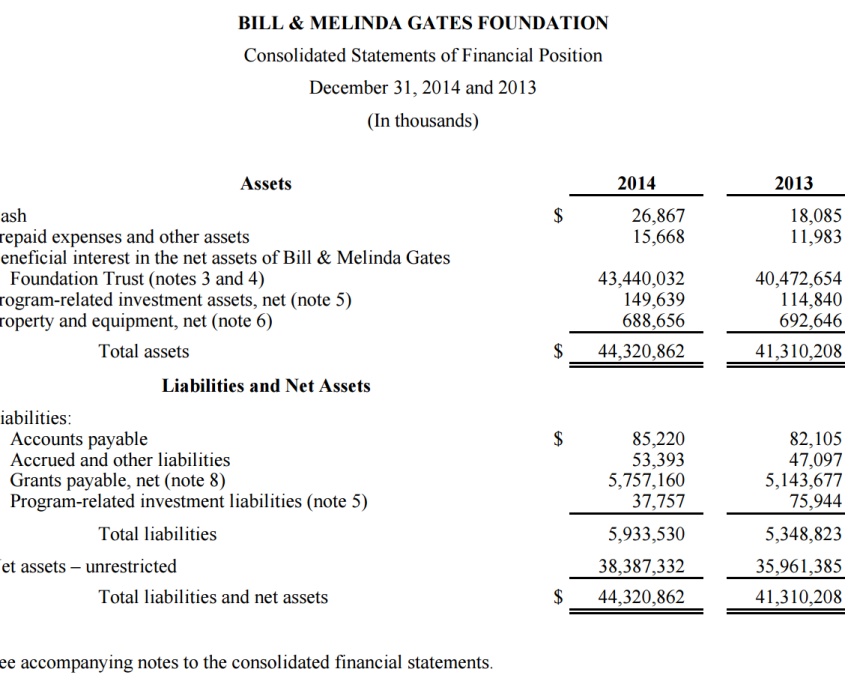 A plain table. It's obvious that the sole goal here was to hand over exact numbers. No effort whatsoever was put into communicating these numbers to the readers. The thing looks like it's been typed on one of those old typewriters my father used to operate on in the 60's.

It is perfectly legit to use tables in reporting, but even tables can benefit from a few design rules. For example, the least you can do is to align the text in columns correctly. But how about doing the readers a favour and present the changes between 2013 and 2014? How about helping them understand what caused those changes?

Enough said, let's move to the important question: can data visualisation help present such financial statements in a better way? Would charts help? Which charts and in what arrangement?

OK, first a couple of observations about this dataset. It's particularly challenging for several reasons, the main ones being:

There are many possibilities how to design consolidated financial statements. Read on to discover 3 redesigns that hopefully get the message across.

Redesign #1: Visualize and explain the changes

Since financial statements are predominantly read by financial professionals, shareholders and other professional readers, my guess is that could appreciate something like this: 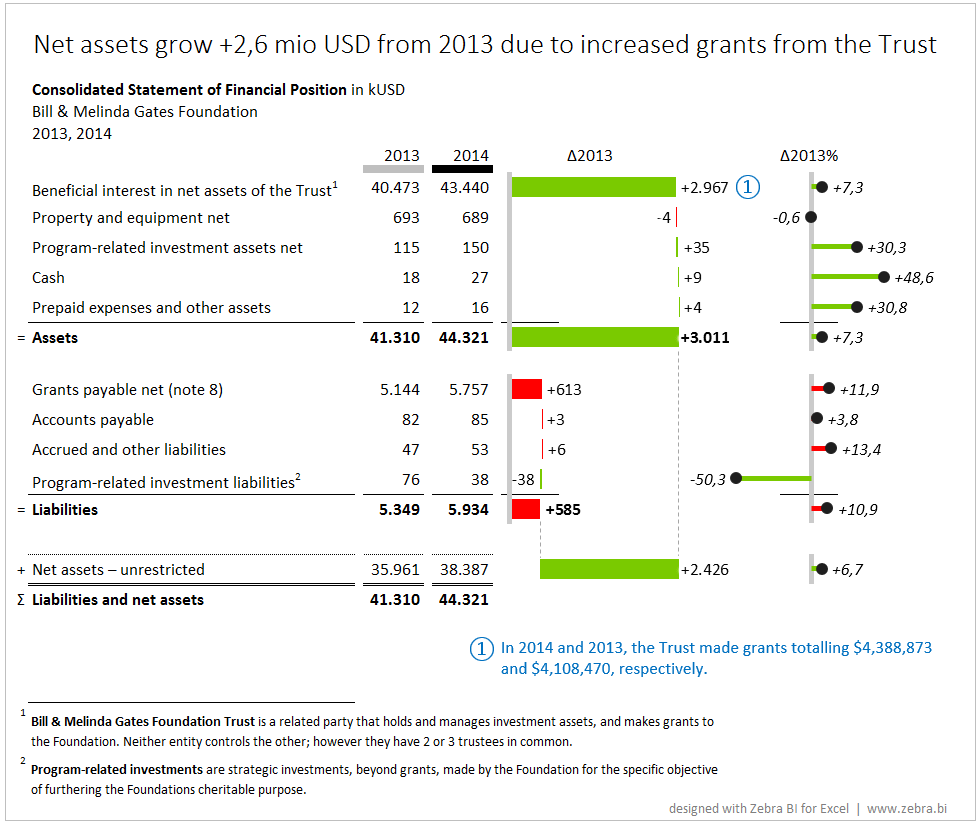 Does it make sense to you?

Since the base values (particular assets and liabilities in USD for 2013 and 2014) differ almost for an order of magnitude (from $43 mio down to $16.000), it makes little sense to try to compare them directly in charts. So I decided to leave them in a table and visualize the variances instead.

After all, the most important thing here is the change from previous year and the explanation what caused this change.

Now for the tricky parts:

A few more subtle details in the design (hopefully) further enhance the understanding:

A big headline at the top introduces the reader to the story, while (finally) a blue comment is added directly to the visualization so that the storytelling is complete (in KPMG's original report, the comments are placed separately somewhere at the back of the 16 pages long report).

Disclaimer: I invented the headline for educational purposes only, I'm certainly not an auditor. Also, if my maths is correct, the KPMG's comment only explains $0,28 mio change, not the $2,9 mio? (@KPMG: help!)

Alright, that was just a warm up 😉 Read on to discover a few more possibilities of designing consolidated financial statements.

Here's another approach, this time more visual. The table is gone, all values are displayed in waterfall charts: 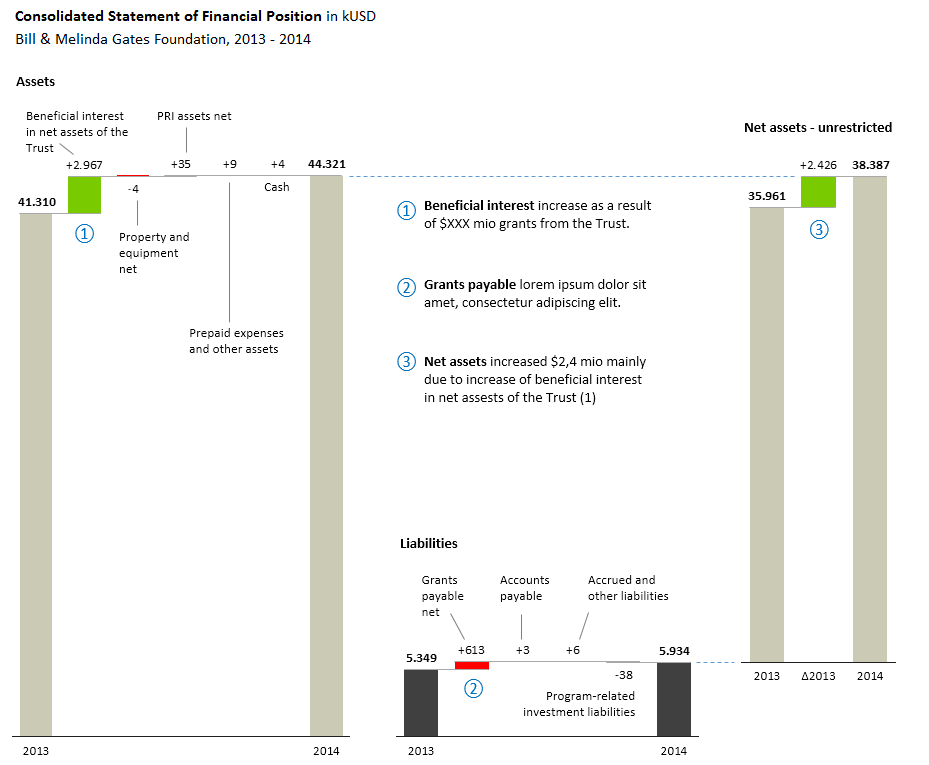 Each waterfall chart explains how the changes between 2013 and 2014 in particular categories contributed to the total growth. E.g. Assets grew from $41.3 mio in 2013 to $44.3 mio in 2014 and practically all this growth is because of +$2.9 mio change in 'Beneficial interest in net assets of the Trust'.

Since all charts are scaled, we clearly see that liabilities are much smaller than the assets, resulting in fairly large net assets. The Net Assets chart is positioned slightly higher - a little trick that helps understand that net assets are a difference between the assets and liabilities.

A simplified version of this approach would be to display the net assets only and focus on how the changes contributed to the final result: the growth of net assets: 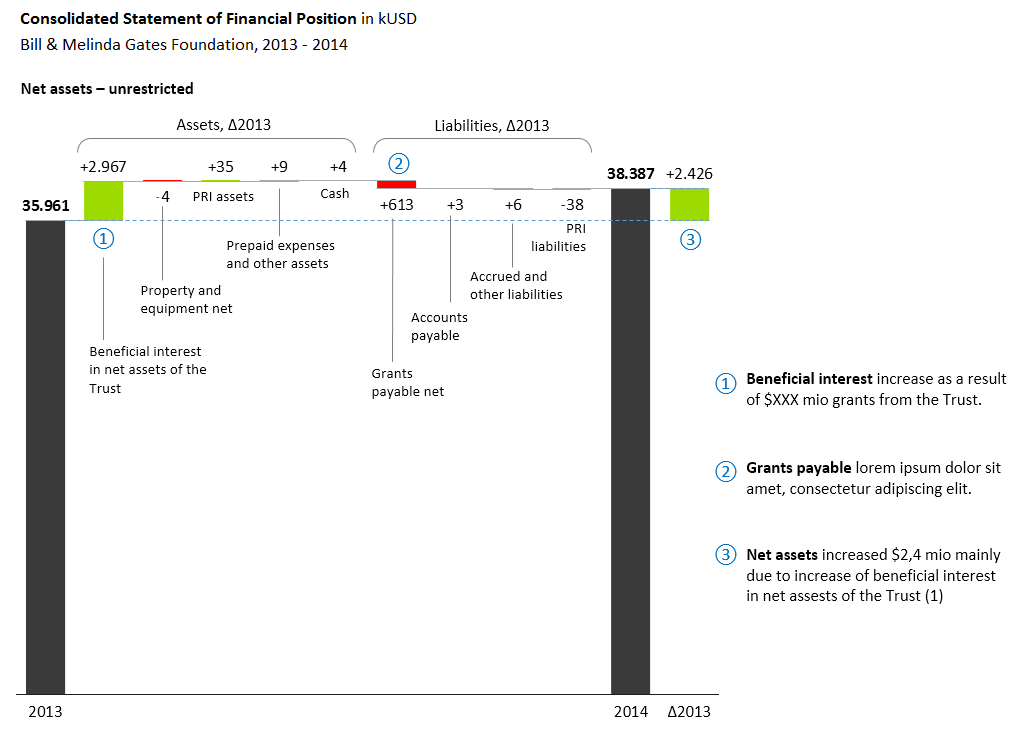 Btw, I've created all my examples, including all the waterfall charts in MS Excel with Zebra BI Add-in. 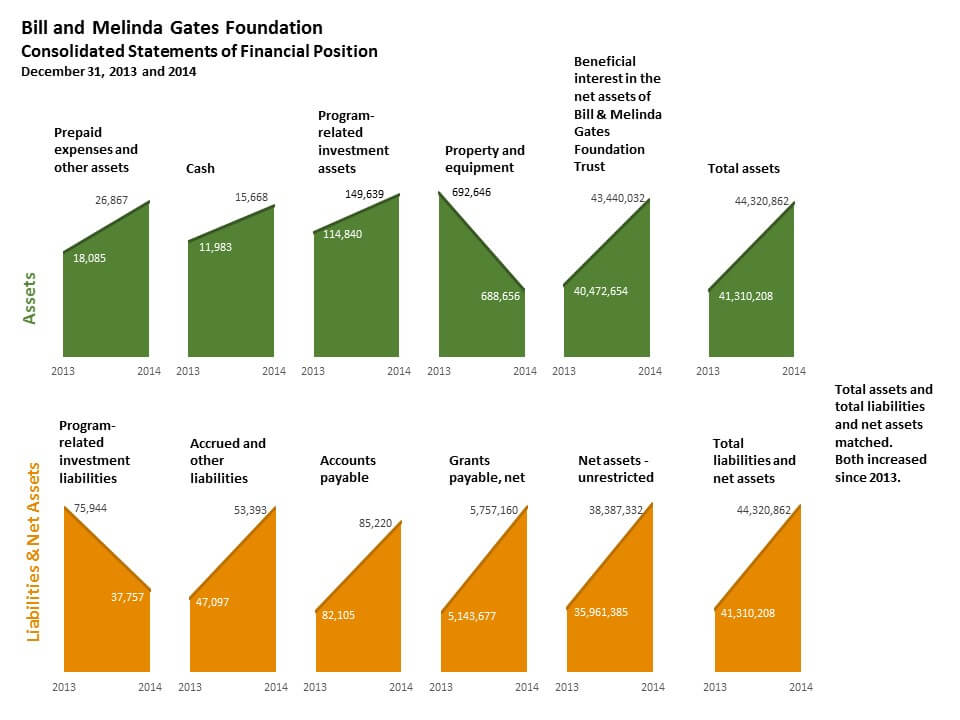 As she proclaimed in her original post,  I'm sure this visualization 'is going to grab a lot more eyeballs'.

All figures in charts, that's great. Arranged in small multiples, that's even more exciting. I'm a HUGE fan of small multiples, as you can learn from my previous articles, for example How to visualize trends for multiple markets, products, etc., Making small multiples in Excel or Small Multiples – 16 are better than one.

But wait a minute, what does the above visualization actually tell us?

That all categories are very similar in size??? That first 3 assets are practically the same and so are all the liabilities (except from the first one)?

And why are Net assets orange and appear within liabilities? According to this visualization's logic, they should be green and placed separately.

The problem of the above solution is that small multiples are not scaled. But they should be. Every chart above has its own Y-axis scale, that's why they all look similar. But as we've already learned, the differences between categories are in fact huge.

So just for a quick exercise, let's try to fix the scaling and see what we get: 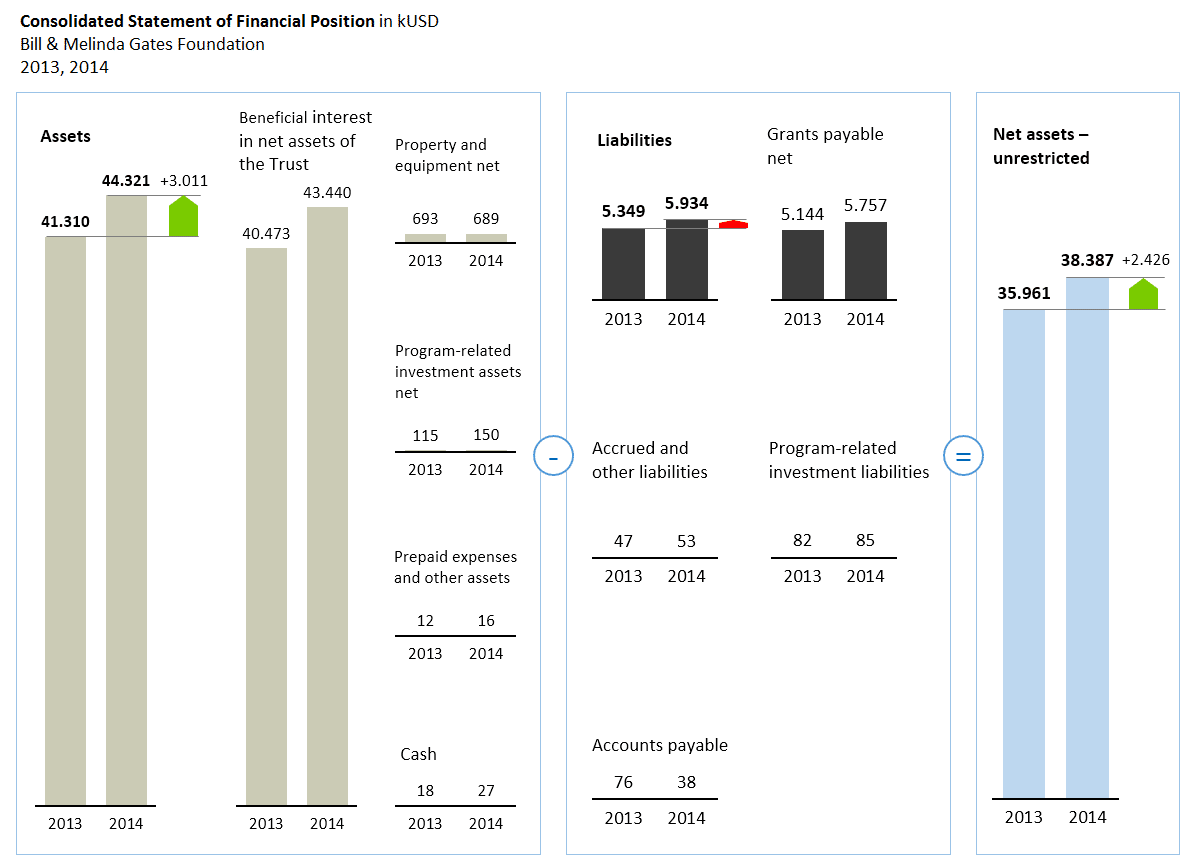 This is a true picture. Everything is scaled so we can compare all the categories. I also added a few red and green highlights to emphasize the key message.

Some categories like Cash or Accounts payable are almost non-existent, but that's exactly the situation in Bill & Melinda Gates Foundation's financials.

BTW, if you really want to break the scale, do it only once and make sure that you visually indicate it: 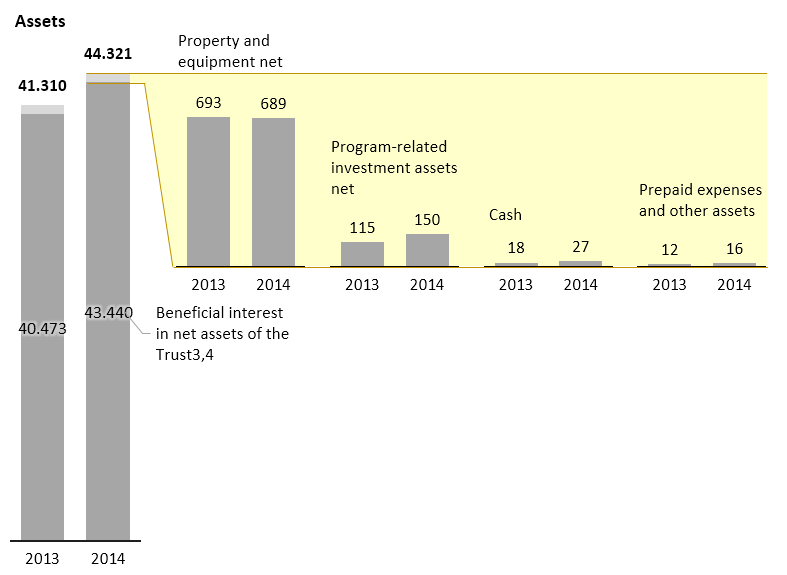 Small multiples with a scale break

I've used the 'lens' method to indicate that all small charts belong to the tiny, practically irrelevant portion of the assets.  The 'Beneficial interest in net assets of the Trust' takes up almost all the assets. Now the chances that the reader will understand the true nature of assets are much higher.

To conclude, I would say that redesign #3 with small multiples is really taking us nowhere, so I would stick with either redesign #1 or redesign #2. Do you agree?

Before I rest my case, I need to make another important point; the choice of data visualization depends on many factors. One of them is the target audience.

Who's reading these reports? Is it the general public, the shareholders or somebody else? Are they financially savy or not?

Only when we're familiar with the readers and their goals, can we decide upon the design. Especially on its complexity.

How to visualize trends for multiple markets, products, etc.